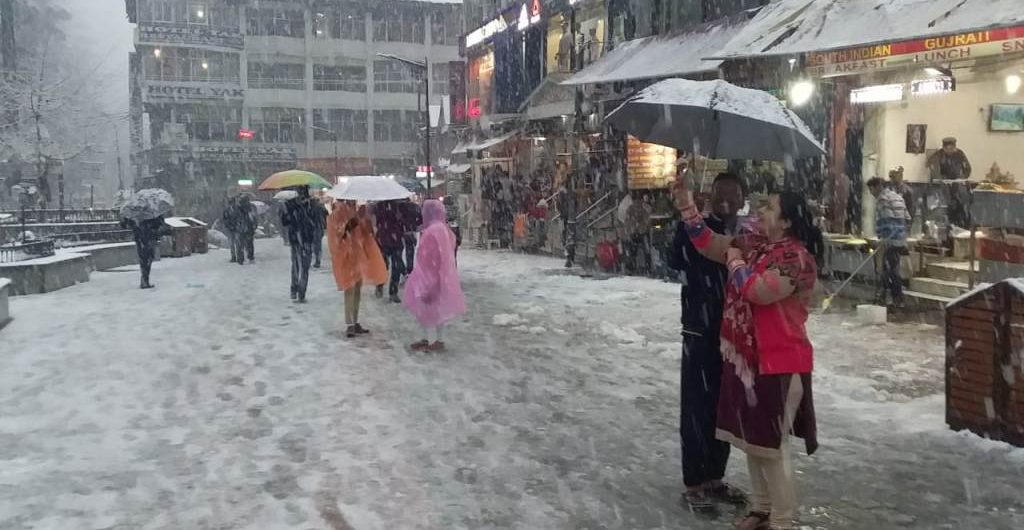 The unexpected snowfall in Manali that started despite high temperature on Monday evening thrilled tourists here but fruit growers are worried a lot as snow may have destroyed plum, apricot and peach crops at some places.

Manali recorded minimum temperature of 3.6 degrees C in last 4 hours. The maximum day temperature was recorded at 16.4 degrees C. There was no possibility of snowfall at such high temperature.

Despite this the town and nearby places are experiencing snowfall. Lower areas including Kullu and Bhuntar towns are witnessing thundershowers.

Snowfall in Manali always brings cheer to hoteliers but it also brings some problems like landslides and cold.

Tourists in Manali started shouting and blowing whistles out of excitement. These days tourists are heading to Solang valley to see snow. Nobody had expected snowfall and were expecting gradual rise in temperature in coming days.

The residents here are annoyed after many spells of snowfall and rain and are praying for sunny days. However, hoteliers consider it beneficial for their business.

Meanwhile, fruit growers are worried because snowfall on flowers can destroy fruit crops. The stone fruits including plum orchards in many areas are in bloom. Deposit of snow on flowers and sudden drop in temperature can destroy the crops.

Snowfall in Manali is normal till March end but it totally depends on temperature and atmospheric pressure. The fresh western disturbance that created cyclonic conditions above Himachal brought snowfall in Manali on Monday.