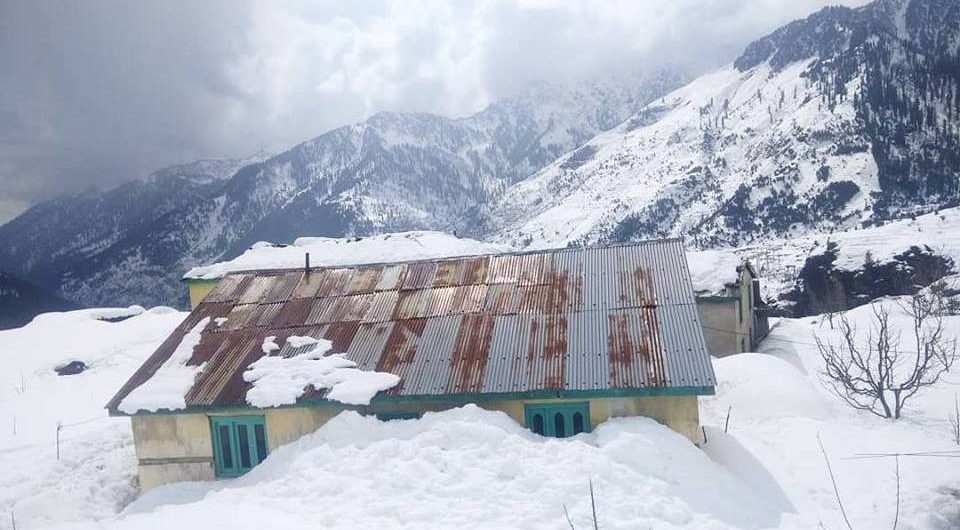 The ground floors of houses in Solang and Kothi villages of Manali have buried under the white blanket as over 5ft of snow has accumulated here after many spells of very heavy snowfall since January.

The snow accumulation below the roofs have reached 10 to 15ft. Snow has entered the balconies and verandahs. Snowfall is delighting tourists here but it has come as a disaster to Solang village of Manali where a house has demolished after landslides below the village, while another houses of the village is on verge of collapse.

A house which can collapse any time has been vacated. The land has developed huge cracks which are advancing towards other houses. The house of Nokh Ram collapsed on Monday night. Fortunately they had already shifted to new house and were using it to store firewood and fodder. The family of Gokul Chand has evacuated the house for safety.

Solang and Kothi villages have received over 20ft of snow since December and are still covered with over 4ft thick white blanket. The melting of the snow has triggered landslides below Solang village which is situated on the edge of the mountain, about 1,000ft above the valley.

The village having about 50 houses has witnessed a massive avalanche after three decades. The terrified residents are still crossing 30ft high avalanche debris to reach home.

“We have received such heavy snowfall after many years. From the backside we are under threat of avalanche and from front side the foundation of the whole village is sliding. The cracks on ground can be seen above the snow surface as well which has opened several feet wide. We are spending sleepless nights,” a resident of Solang village Roshan Lal said.

With no road connectivity, Kothi residents had to stay indoors for many days in January and February. The first floors of the houses are still buried below the snow. The villages look fairyland but in fact life inside villages is full of struggle in winters.

Both the villages witnessed more snowfall on Thursday. BRO is struggling to keep the Manali-Rohtang highway open till Kothi village which is being blocked by snow again and again.