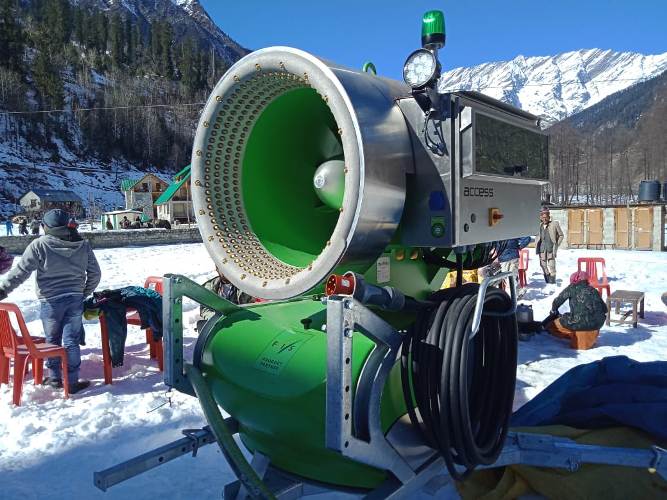 MANALI: Be it Kufri, Narkanda, Solang or any skiing slope of Himachal, none of them have snow-making machine like ski slopes of developed nations. Despite high demand from skiers, government has failed to buy a single such machine to ensure availability of snow on slopes whenever needed. But, four youth from Manali villages have imported a snow-making machine from Europe which will start making snow in next few days.

Sunil Thakur, Hira Lal, Mohan and Gokul Thakur, all from villages near Manali, spent more than Rs 30 lakh to bring this machine to Solang village of Manali. What motivated them to introduce this machine to Manali was the uncertainty of snowfall on Himalayas even during winter months and thousands of tourists thronging hill stations only to see snow. They are installing the machine on a private land, not on the skiing slope.

“Our basic idea is to make a snow park in Manali where tourist can see snow throughout winter season. The installation is on final stage. We have a small glitch with water hose coupling. The machine has coupling with European standards and ours is of Indian standards. We are fixing the problem. Hopefully we shall start making snow with seven quintal machine in 3-4 days,” Sunil said.

The ski slopes of Solang are on government land and majority of its part is leased out to a private company where individuals cannot do such experiment. So, the youth chose the private land near the slope. Hira Lal, who has participated in Winter Olympics and World Skiing Championships, had seen such machines abroad and wanted to bring one to India. He partnered with three others and turned the dream into reality. Roshan Lal Thakur, former secretary general of Witner Games Fedration of India, also helped them in bringing machine to the country.

Sunil added that Solang is ideal place for developing snow park as they can make snow here from late October till late March when temperature in the area dips to freezing point. “The machine is eco-friendly with no emission. Water and pressurized air is forced through a snow gun when temperature is below freezing point and tiny water drops turn into snowflakes. This is common in developed nations but would be a new thing in Himachal. We have not thought of how we shall run the park but we are expecting support from government and administration.”

The pattern of snowfall is changing around the world. Sometime it is snowing heavily while many times winters are passing without or very less snowfall. The ski resorts in developed nations have many snow machines that make snow whenever they want if for winter games, provided that temperature is favourable. In Manali too, vagaries of weather have hit the tourism hard in past few years when there was very less snow. Snow machine, popularly known as snow gun, will provide an opportunity for tourists to see and enjoy both snow and snowfall during winter months without depending on natural snowfall.

Dr Preetam Singh
Reply
Dear Mr. Thakur, I am an eye specialist based in Amritsar and my passion is cross country skiing. I have participated in more than twenty Worldloppet cross country ski races all over the world and am the first Worldloppet master from India. One needs to qualify in 10 different races in 10 different countries to become a master. I was wondering if cross country skiing is available in Himachal? If not, would you be interested? Looking forward to hearing your views. Best regards, Dr Preetam Singh