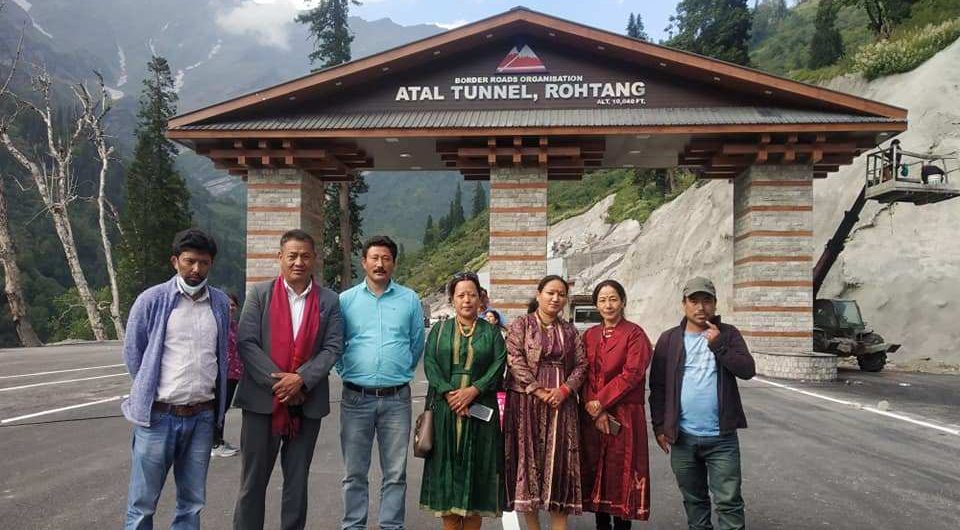 Synopsis: With inauguration of Atal Tunnel, Rohtang, just around the corner, this is a historical moment for the nation. But this is much more than just an inauguration of a project for residents of Lahaul, Pangi and Killar. This is the “tunnel of hope” that will bring fortune to the valley and set them free from centuries of imprisonment. A “Thank-You” programme held at Manali under the banner of Lahaul-Spiti Eco Tourism Society and Layul Utsav Committee where the officials of Border Roads Organization (BRO) and Afcons, the engineers, security personnel, designers and many others were given the honour by presenting them Lahauli cap, muffler, Buddhist khata, socks and plants.

The tribals of Lahaul valley are celebrating the completion of the Atal tunnel, Rohtang, which will give them freedom from six months of imprisonment in winter months. The happy residents are organising a series of functions to honour all those who are involved in the making of this tunnel.

The tunnel is ready and is expected to be open to general traffic by end of this month. With this, the residents will enter an all-new era where they can travel outside their valley even during winter months. As this dream of bypassing deadly Rohtang pass has been fulfilled after over 50 years, the residents under banner of Lahaul-Spiti Eco Tourism Society and Layul Utsav Committee expressed their gratitude towards key persons who helped in approval of this project and the engineers and officials who build the tunnel by honouring them in traditional style on Sunday.

The Border Roads Organisation (BRO) officials, the engineers, security personnel, designers and many others were given the honour by presenting them Lahauli cap, muffler, Buddhist khata, socks and plants. Some media persons and panchayat representatives close to the tunnel portals in Lahaul and Manali were also honoured.

Rigzin Samphel Hayerpa, a member of the Lahaul-Spiti Eco Tourism Society (ETS), said the tunnel is the biggest gift to the people of Lahaul which will totally transform the lifestyle of people.

“Only people of Lahaul can understand the pain of getting locked inside valley for six months every year when heavy snowfall blocks Rohtang pass. We honoured some of the major people who fulfilled our dreams by working day and night in the tunnel project. More tunnel heroes will be honoured in another programme in Lahaul,” he said.

Ramdev, son of late Tashi Dawa alias Arjun Gopal, who was a close friend of former PM Atal Bihari Vajpayee and who is given credit to convince Vajpayee to sanction the tunnel project, was also honoured along with few other elderly people from the valley who were member of the delegation who met with the Vajpayee, Defence Minister and other top politicians many times in Delhi in connection with tunnel.

Ramesh Farka, another member of the Lahaul-Spiti Eco Tourism Society, said another such programme will be organised in Lahaul valley to honour residents of Lahaul who were working with the tunnel project.

“We had organised similar programme in 2017 when digging of tunnel had completed. A festive-like atmosphere can be felt in entire valley. The tunnel is beneficial in strategic point of view but it is more beneficial for us,” he said.

Atal Tunnel project director Col Parikshit Mehra shared some of the technical aspects of the tunnel with all. He adds, “BRO is known to work in extreme conditions. BRO has built many engineering marvels to strengthen national security and to connect remotest areas with the mainland. But this project has brought biggest feather in the BRO cap. Now we are confident that we can build any kind of tunnel in the Himalayas. This is the longest motorable tunnel of the world at above 10,000ft.”

Suneel Tyagi, project manager of Afcons, the company responsible for digging of the tunnel, shared his experience of ten years working with the project. He told that how difficult it was to dig the tunnel under difficult geographical conditions and how Seri nullah default zone inside the tunnel challenged them for three years.

“In October 2017 when we achieved a breakthrough in the tunnel, somebody asked me that why Rohtang tunnel, isn’t there any other name for this tunnel. Yes, I replied, The Tunnel of Hope. I knew residents of Lahaul had dreamed about this tunnel for decades. Initially, when we started our work at full swing, everyone told us that you will complete the project well before the stipulated time period of 62 months. And then came the Seri nullah challenge and it took us nearly three years to negotiate only 600m. We witnessed many ups and downs. Finally, this tunnel is going to be dedicated to the nation,” Tyagi said with moist eyes.

Concluding the ceremony, ex-MLA and former National Commission for Scheduled Tribes vice-chairman Ravi Thakur, who is also a member of Lahaul and Spiti Eco Tourism Society, told in detail that how former PM Jawaharlal Nehru and Indira Gandhi visited Lahaul and how people had requested them to connect the Lahaul valley with an optional route.

“The UPA government inaugurated the tunnel on June 28, 2010. For most people and for Ministry of Defence, Atal Tunnel, Rohtang will benefit the Indian Army by reducing the distance and travel time between Manali and Leh, but it is something more for residents of Lahaul. Besides its strategic importance, the Rohtang tunnel is going to change our lives completely,” he said.