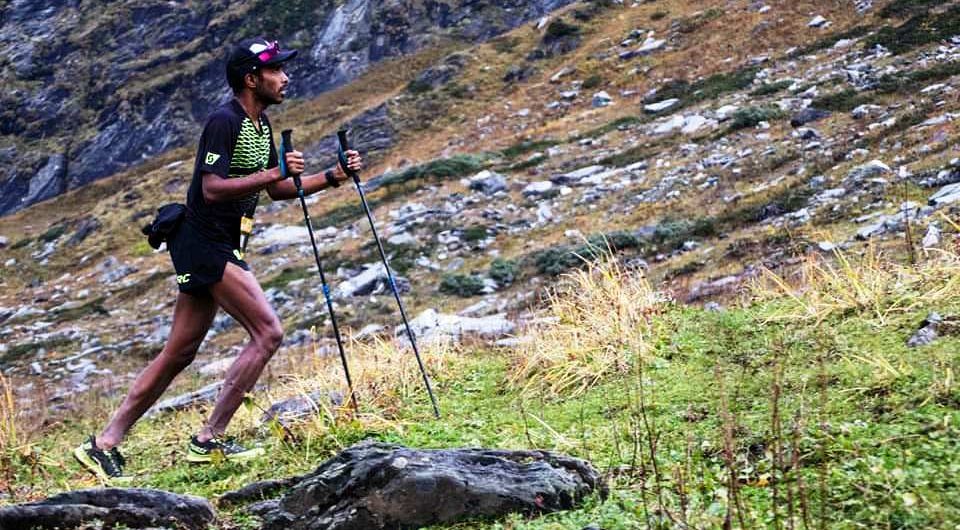 Ultramarathon runner Kieren D’souza has set a new record by running across two mountain passes with altitude more than 13,000ft, covering total distance of 126km in less than 19 hours. The trained mountaineers and trekkers otherwise take 6 to 10 days to cover the same route.

This ultra-running starting and ending at Manali involved traversing Hamta pass (14,000ft) and Rohtang pass (13,050ft) held under observation of Atal Bihari Vajpayee Institute of Mountaineering and Allied Sports (ABVIMAS) on September 5 midnight. This run was given a name “triple trouble run” for its three hurdles Manali to Hamta pass, Hamta pass to Rohtang pass and Rohtang pass to Manali. Kieren didn’t stop until he completes the whole run at about 7pm in Manali.

Manali-Hamta pass-Chhatru is a popular trekking route among India and foreigner trekkers. Hamta Pass trekking is completed in four days. Kieren completed this stretch in just a few hours. Chhatru to Rohtang and then Rohtang to Manali stretch was also completed in just few hours. Trekkers generally take a minimum of nine to 10 days to complete this circuit but Kieren D’souza completed it in 19 hours.

ABVIMAS director Col Neeraj Rana said the race held under the close watch of two observers from the institute. “Kieren has completed the race in 18 hours 55 minutes. Nobody has done this before,” Kieren D’souza said.

Before this, Kieren D’souza accomplished almost impossible task of climbing 17,300ft high Mt Friendship peak in just one day in June. He started running from Manali, reached Beas Kund, the base of the peak, successfully climbed the snow-laden peak, climbed down, and ran back to Manali in just 12 hours. Trained mountaineers take days in planning and then at least five days to climb it.

Kieren D’souza hails from Nagpur but lives in Manali. He moved to Manali for rehearsal on the Himalayas but the recent lockdown encouraged him to attempt some of the impossible tasks. His team “4Play” helped him in accomplishing both the tasks. Kieren is a professional ultramarathon runner who has participated in dozens of races across the world. He is often called the fastest man in the Himalayas.

Running and just running is his passion and profession. I want more and more youth to adopt running as a sport and hobby. I also want to attract public attention towards trekking, climbing and other adventure sports which not only keep them fit but also close to the nature. I look forward to attempting something more difficult:  Kieren D’souza

Manali SDM Raman Gharsangi, who was also observing extreme races of the Kieren D’souza, said, “I couldn’t resist myself from meeting him when I knew about his endurance, ability and stamina. I came to receive him in Manali town after he completed the triple hurdle race. He is an amazing sportsperson. He has been given a certificate by ABVIMAS as an acknowledgment. This should be a world record that is almost impossible to break.”