Rohtang, the pass of trouble

Rohtang, the pass of trouble 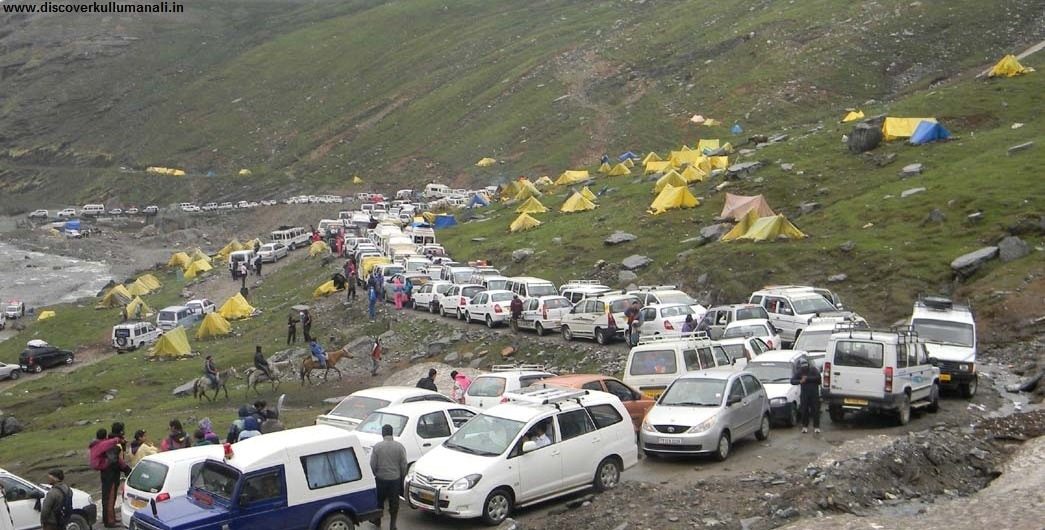 Rohtang pass has now become a mountain of troubles. Once a tourist comes here, apart from some wonderful memories, he also takes with him the scary experience of trapping without food and water.
The monsoon rains have eliminated the endurance limit of fragile mountains of Rohtang which is resulting in landslides. Following landslides, around 500 vehicles on Saturday remained stranded for more than 12 hours near Marhi while similar numbers of vehicles were stranded at the both sides of landslides on Sunday. Most of the people including tourists preferred staying inside their cars but few of them dared to walk on foot. Not only civilian cars, cabs and Himachal roadways buses but also several military trucks were trapped for hours.
A stranded tourist at Rohtang, Mrityunjay from Bangalore said over the phone, “We were coming back from Ladakh and reached Rohtang at 5.30am. We saw a long queue of vehicles few miles below Rohtang and somebody told us that landslide has blocked the highway. We are still trapped here. We have no other way than waiting for the restoration of road.”
Along with three Himachal roadways buses, one Himachal tourism bus, around 1,500 people were trapped without food and water below Rohtang pass. “Our bus was trapped there since early morning on Saturday. We spent whole day there but when we realized the actual condition of landslide, most of us started downhill walk towards Manali,” a resident of Udaipur in Lahaul, Anil Bodh said.
People are facing many problems at Rohtang pass. They are driving on death zones. They are crossing active landslides putting their lives on danger. If caught in fury of nature, they are dependent on their own wise decisions. If their vehicle traps due to landslide or other reasons, they get problem even finding another vehicle. In such conditions, bringing a cab from Manali is the only option but ordering car is not an easy task. No cellular network works near all dangerous points of Rohtang.
Border Roads Task Force major Praveen Yerunkar, who is supervising the clearance work of landslides, said they have applied all available techniques to stop the slides but could not control them. “We are working 24×7 to control the landslides but monsoon has increased our problems. It is standing like challenge for us,” he added.