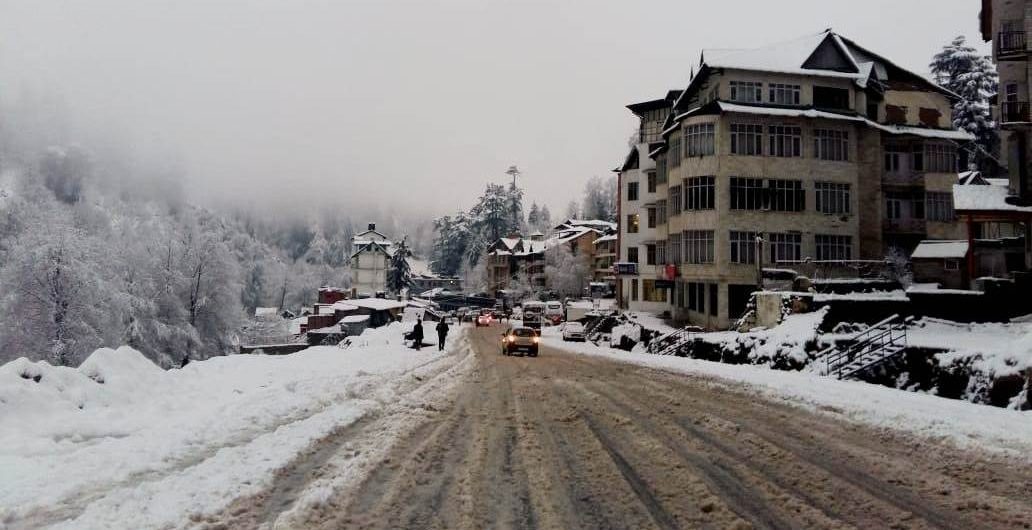 MANALI/ SHIMLA: Eight districts of Himachal are receiving heavy snowfall while other districts are lashed with rain following the aggressive western disturbances which are expected to bring more snow to state till January 26. The inclement weather has triggered cold wave conditions in the state.

Higher reaches of Kullu, Lahaul-Spiti, Kinnaur, Chamba, Mandi, Shimla, Kangra and Sirmaur are receiving very heavy snow. Tourist resorts of Shimla, Dalhousie and Manali also woke up to a thick layer of snow on Tuesday. Most places are receiving snow since Monday night. Shimla and Manali had received over 10cm of snow till filing of this report while Dalhousie received 15cm snow. Kothi and Solang have received over 45cm of snow. Keylong (15cm), Koksar (30cm), Kalpa (7cm), Bharmaur (8cm), Saloni (6cm) and Sarahan (5cm) are also receiving good snow since Monday night.

While snowfall and rain have triggered landslides at many places, the higher reaches are on alert due to avalanche threat. There are some reports of avalanches from Lahaul valley. Lahaul-Spiti administration has advised residents to stay indoors during snow storm conditions and avoid venturing close to avalanche prone areas.

Over 200 bus routes in state were affected following the snowfall. Many state and district roads are blocked while traffic in entire Lahaul valley has come to a complete standstill. Vehicles in upper Shimla, upper Manali, Jalori pass and upper Chamba were struggling to keep moving. Taking precautionary measures, tourist movement in Manali has been stopped beyond Bahang as vehicles are slipping on road. Power supply in some higher areas was crippled partially.

Avalanches in Dhara and Dimru nullahs, tributaries of Chenab, near Udaipur in Lahaul have blocked the water flow since Monday late night. As bursting of the dams can wreak havoc in lower regions, administration is on an alert. Similar avalanche near Udaipur on Monday had stopped the flow of Chenab river for some time.

Kullu deputy commissioner Yunus said the district administration and district disaster management authority are on alert. “Higher regions are getting heavy snow. We had already supplied essential items including ration and fuel to the remote areas. We are keeping an eye on tourist activities to prevent any mishap. All the departments have been asked to stay alert and keep roads open and power supply in running condition,” he said.

This is the heaviest snowfall of the season which has cheered tourists and hoteliers. A large number of tourists are expected to throng Himachal in next few days. Fruit growers and farmers are also happy with the snowfall and rain.

A fresh cold wave has gripped entire state. Both maximum and minimum temperatures of state have decreased by 2 to 4 degrees C in last 24 hours. At minus 8.6, Keylong was the coldest in state. Kalpa, Manali, Shimla, Dalhousie, Kufri and Dharamshala recorded the minimum temperature of minus 2.4, minus 1.2, 0.7, minus 1.8, minus 2.1 and 2.8 degrees Celsius respectively. Meteorological centre, Shimla, has predicted more snow and rain in state till January 26.

The Himalayan
Previous postWork at our terms or face boycott: Manali hoteliers to online booking giants
Next postNational skiing, snowboarding championships from Feb 2

Murray
Reply
I found your internet site from Google and also I need to say it was a fantastic locate. Many thanks!

Vinay
Reply
We r planning for may 3 to 5th, is rohtang will be open ??

enigma007
Reply
Hello Vinay. Sorry, Rohtang pass will open for tourists only at the end of May or early June. However, you can see snow below Rohtang in Manali. You may have to walk/hike a little.

Rachele
Reply
First of all I would like to say great blog! I had a quick question which I'd like to ask if you don't mind. I was curious to know how you center yourself and clear your thoughts prior to writing. I've had difficulty clearing my thoughts in getting my thoughts out there. I truly do enjoy writing however it just seems like the first 10 to 15 minutes are usually wasted simply just trying to figure out how to begin. Any suggestions or hints? Thank you!