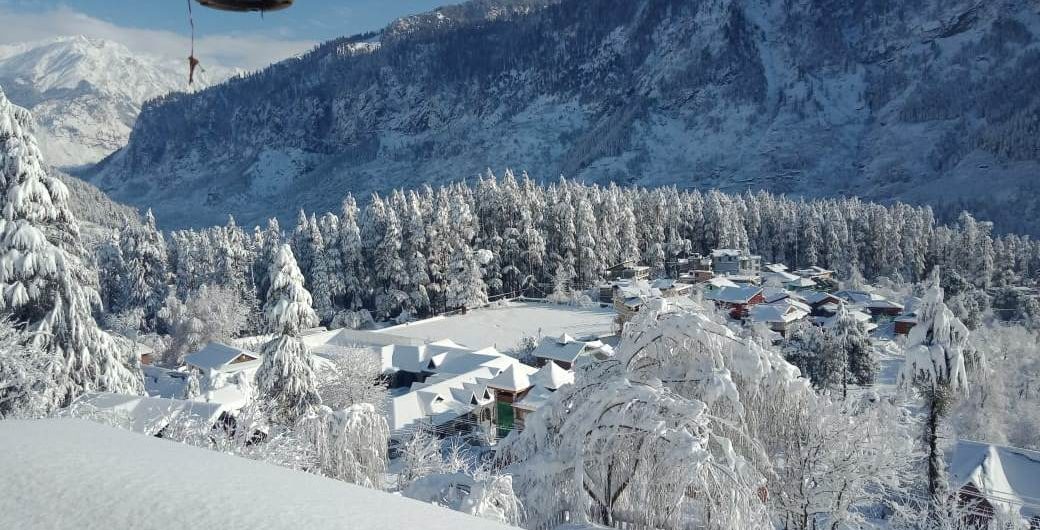 With almost all major and link roads including Kullu-Manali national highway blocked with landslides, hundreds of trees uprooted and no phone or internet access in many places, heavy rain and snowfall has wreaked havoc in Kullu-Manali.

Despite all this, tourists are having fun in Manali as the town is receiving frequent snow. Manali and its nearby tourist places are covered with blanket of snow. This season the region has received more snow than last many years, which has cheered both hoteliers and tourists. However, district administration and police have issued advisory to the tourists that they should avoid night driving and should not go to higher areas.

While a massive avalanche near Nehru Kund, about 7km from here, has blocked Manali-Solang highway, dozens of landslides along Kullu-Manali highway has blocked Manali-Chandigarh NH at multiple places since Thursday evening. Kullu-Manali bypass road was also blocked after landslide and collapsed trees but was thrown open in the noon. All the link roads connecting hundreds of villages have suffered damages following landslides.

Landslides and collapsing of trees have damaged power transmission lines at many places, plunging large number of villages into darkness. Power supply to Manali town was cut after later afternoon.

Manali and nearby hundreds of villages have no telephone connectivity since Wednesday night. These areas also have no internet for two days. However, connectivity was partially restored by private operators in some areas but BSNL network is completely dead.

Landslides have damaged many houses and private land. Farms and orchards have been damaged at many places. Hundreds of fruit and wild trees have been uprooted. Kullu-Manali national highway has suffered the most losses because of extreme cutting of its edges for widening of the road. The road has become very dangerous as it has no protection and breast walls to protect traffic from slides.

Rain that started on Wednesday is still continuing in Kullu and landslides are still active. Higher reaches of the district are getting more snow. As the snow is wet and heavy, it is causing damages and triggering avalanches.

Forest and transport minister Govind Singh Thakur took stock of the damages on Friday and said public works department, irrigation and public health department and district administration have been directed to restore all the roads. “Heavy rain and snowfall has caused blocking of the roads. Thankfully there is no report of any casualty but houses have suffered damages. Power and water supply has also been affected at some places. Weather is inclement but concerned departments have been asked not to stop the restoration works. PWD has been asked to deploy enough machinery on national highway,” he said.

Lahaul-Spiti district has witnessed multiple avalanches in two days. An avalanche near Pangmo village of Spiti has buried five parked vehicles. There was no injury or casualty reported.

Another avalanche near Kaza in Spiti has partially damaged a part of Chomo Gompa and damaged roof of a forest guard hut.

In Lahaul, the roof of a warehouse of Food Corporation of India (FCI) at Karga village has collapsed due to weight of snow on the roof. The entire district has received very heavy snow in last few years. Over 100cm of snow is accumulating here, which resulted in collapsing of the roof. The villagers in district keep clearing roofs of the snow regularly.

Lahaul valley has no electricity since Wednesday. All the villages, except for Keylong and Udaipur has no internet connectivity.

Lahaul valley has nearly 20 patients who are required to be airlifted to Kullu. But the inclement weather is forcing suspension of the helicopter sorties.

15km from road, each house in remote Kullu village has patients

Remote Majhan village of Gadaparli panchayat in Kullu district, which is reachable after 15km of uphill climb on foot, has patients in each house and we are struggling to bring them to Kullu hospital on our back, claims the villagers.

A video is going viral on whatsapp where residents of Gadaparli panchayat are carrying a patient on shoulders after tying him to a chair that is attached to two poles, making a palanquin and walking on a narrow trail in steep mountain face with deep valley on its one side.

A local resident Roshan Lal says: “Our villages have no road connectivity. Majhan is nearly 15km from road head. We have seven patients brought to Kullu hospital. This is second patient that we are carrying today. The village has 2ft of snow and all houses in Majhan have patients who are required to be brought to hospital for treatment. Government should do something.”

Majhan, Shakti, Marod and many other villages inside Sainj valley of Kullu are 15 to 22km from road. The path is narrow and dangerous. The area receive heavy snow. People face actual problems when anybody gets sick. Patients are tied to chair and are brought till road on backs and shoulders by the villagers.