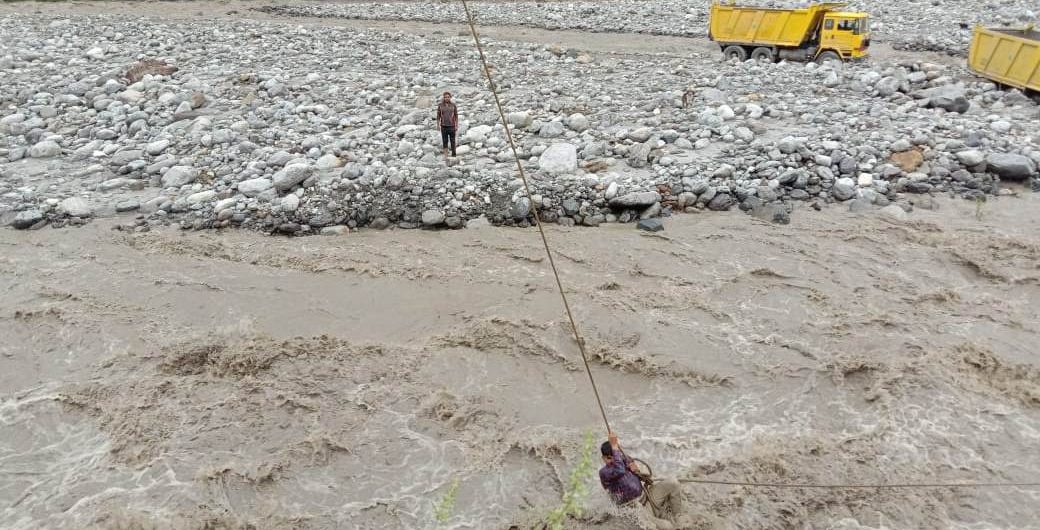 The incessant rains in Kullu district have wreaked havoc as rivers are in flood, major roads and bridges are closed, people living close to rivers have started shifting to safe areas and landslides preventing people from going from one place to other.

Both Manali-Rohtang-Leh and Manali-Chandigarh national highways are closed. A government school building at Palchan village has collapsed due to flood in Beas. A major bailey bridge at Akhara bazaar of Kullu that connects the Kullu town with left bank of Beas has been closed for traffic following Beas river damaged the approach road to the bridge.Two trucks and their drivers got stuck in the middle of the Beas at Patlikuhal near Manali after water level rose suddenly. Both, identified as Nand Kishor and Ravi, residents of Rajasthan, were rescued with the help of a rope and hydra crane.\n

Traffic on Chandigarh-Manali national highway is stopped from Kullu and Mandi sides after a stretch of highway submerged near Duwada in Mandi district. While the buses and other heavy vehicles are stopped completely, light vehicles are being diverted to bypass road via Katola. A large number of buses, including tourist buses, are stopped at Bajaura. Police said the traffic will be resumed only after water level recedes and road becomes safe.

The 38 Border Roads Task Force commander Col Uma Shankar said the Manali-Leh highway has also been blocked due to floods and landslides. “Massive landslides at Teling nullah and Pagal nullah in Lahaul have blocked the highway. We have cleared debris at Teling nullah but another slide has blocked it again. Machines are engaged to clear pagal nullah stretch. We have seen multiple landslides in 24 hours. We are working hard to resume traffic.”

Chandigarh-Manali NH submerges near AutAll the water streams between Rohtang and Sarchu are in spate and have made travelling extremely risky. Stones are falling on the roads in Kullu. People living close to rivers have started to move to safe places to spend night. The flood in Beas has shaken foundations of nearly a dozen bridges. The access silt along with surplus water in reservoirs of hydel projects have forced them to release water.

District administration has sounded an alert and requested people to stay away from rivers, nullahs and landslide prone areas.The administration has stopped vehicular movement towards Rohtang and Ladakh from Manali onwards. People are advised not to travel in night time and not to park vehicles close to rivers and mountain sides.

Kullu deputy commissioner Dr Richa Verma said people are advised to stop venturing close to rivers, nullahs and landslide-prone areas. “Hoteliers have been asked to tell the tourists about the current situation and not to take any risk. Stones are falling on the roads. So people should not travel until it is necessary. Those planning to go to Rohtang and Lahaul should postpone their travel,” she said.

Four persons died, hundreds of tourists were stranded, 186 roads were blocked and a dozens of houses were damaged as heavy rains triggered floods and landslides in Kullu, Mandi and Lahaul-Spiti districts of Himachal.

A person died at Jibhi while another died near Rohtang pass. A tourist had reportedly died near Chhatru in Spiti. Another tourist from Telangana, identified as Raghav, 22, was hit by a shooting stone near Manikaran in Kullu. The victim has succumbed to injury at the hospital.

Nearly 25 tourists including a foreigner tourist who had gone for trekking to Beas Kund in Manali got stranded after flood in Dhundi nullah on Friday evening. They had limited food stock. A shepherd on Sunday morning informed the villagers at Solang that some tourists are stranded near Dhundi.

“I, my staff and other youth from village rushed to Dhundi and rescued 25 tourists with help of ropes. The tourists had gone treking without a guide. They were brought back to Solang. All are safe,” Roshan Lal, a resident of Solang village, who runs an adventure sports company, said.

The floods are expected to have caused damages worth more than a hundred crore in Kullu and Mandi. Over 150 water schemes have been damaged and power supply to some areas has been affected. The roads are washes away in floods. The landslides too have damages the road.

While the highway near Hanogi Mata temple in Mandi is submerged in Beas, many chunks of the highway have been washed away. Two major bridges in Kullu are damaged. A few vehicles were also washed away in Beas in Mandi.

Border Roads Organization commander Col Uma Shankar said multiple landslides between Manali and Keylong have blocked the highway. “We are clearing the debris. We have advised people to avoid travelling on Manali-Rohtang highway,” he said.

Keylong SDM Amar Negi said the district has witnessed some landslides however Keylong-Koksar highway is clear. The Spiti road is blocked. A few people are stuck near Chhatru who are coming towards Koksar on foot. A person who was unwell is reportedly dead. We have sent a bus and ambulance to Koksar,” he said.

Kullu DC Dr Richa Verma said work is continuing on war footings to restore the roads. “The schools in Kullu will remain closed on Monday. The officers are asked to stay in the field to take stock of relief works. The employees are asked not to take leave unnecessary. People are advised to stay away from rivers and water streams,” she said.

Keylong SDM said the snowfall in August month took residents for a surprise. “The snow had melted away in few hours. It has caused drop in temperature,” he said.

At least 2,000 people, mostly tourists, have stranded in Lahaul-Spiti district of Himachal after landslides and floods blocked Manali-Leh and Manali-Spiti roads at many places on Saturday.

Over 1,000 people and 400 vehicles have stuck between Sissu and Koksar. The helpless people have taken refuge in the hotels, guesthouses, homestays and residential houses in Sissu and nearby villages. Not able to get accommodation, many people are staying in their vehicles. Nearly 40 vehicles of Indian Army bond for Ladakh too have stuck near Sissu.

A large number of tourists who want to go to Ladakh have stuck at Darcha and those who want to come to Manali are stuck at Sarchu. Many tourists are staying in hotels at Keylong and Jispa. Over 300 tourists are expected to have stranded between Gramphu and Kaza. The Manali-Leh highway has been damaged at Teling nullah, Pagal nullah, Zingzingbar and many places between Darcha and Sarchu.

127 tourists who had stranded at Chandratal of Spiti after landslides and snowfall were rescued on Monday. They have been shifted to Kaza. However, Kaza-Shimla and Kaza-Manali roads too are blocked. 150 tourists stranded near Chhatru were rescued on Sunday evening. Tourists who are staying in hotels are safe but those staying in vehicles, tents and those stranded in midway have no meal, water and medical facilities.

Agriculture minister Dr Ram Lal Markanda who belongs to Lahaul valley said he is in Spiti valley and is monitoring the relief works himself. “All our major roads are blocked. Restoration works are continuing. Over 300 tourists are stranded between Gramphu and Kaza. Rescue operations to reach them are being carried out on priority. 127 tourists from Chandratal have been rescued. Hundreds of more tourists have stranded at many places in the district,” he said.

According to him, the district has suffered damages worth crores of rupees while fresh snowfall may have damaged crops at many places. He added that Gramphu to Sumdo road is handed over to Border Roads Organization (BRO) but they don’t have enough machinery. “As BRO has inadequate machines, we have deployed 11 private JCBs to open the roads. Pea is the main cash crop here which is ready to harvest. A large number of farmers met me and requested to open the road on priority, otherwise their crops will rot before reaching vegetable markets,” he added.

38 Border Road Task Force commander Col Uma Shankar said floods and landslides have badly damaged the roads. “It will take two or three more days to restore traffic on Manali-Kaza road. The road is completely washed away at some places. The Manali-Leh road too has suffered damages between Koksar and Sarchu. We are putting all efforts to open the road by Monday late evening,” he said.

On the other side, it will take many more days for Kullu district to come to normalcy as floods and landslides have badly damaged the roads and bridges. Many villages have completely disconnected. The Manali-Kullu national highway is still blocked as flood in Beas washed away a huge chunk of road at Aluground near Manali.

Providing some relief to public and tourists, Kullu-Mandi national highway which was blocked since Saturday has been thrown open to one-way traffic on Monday evening. The Mandi-Chandigarh stretch of the highway is still blocked but other bypass roads are open.

A 2.5-month old child has reportedly died in the lap of her mother in a bus at Swarghat in Bilaspur district. A couple from UP who work at labourer in Mandi had got stuck due to road blockade.

Kullu deputy commissioner Dr Richa Verma said of the 89 blocked roads, 51 roads have been opened on Monday. “Most of the water schemes have been resumed and remaining will start functioning by Tuesday evening. Blocked roads and affected power supply would be restored very soon. All the officials have been directed to work honestly and work overtime, if required.

The Manali-Leh national highway which was blocked due to landslides and floods at many places has been opened to traffic on Monday evening.

BRO officials said they have cleared debris from all the damaged stretches and road is ready for traffic. A few vehicles from Lahaul have reached Rohtang pass. The Manali-Rohtang pass-Koksar stretch was cleared of debris on Sunday. The officials have advised people not to drive during night time and avoid driving unnecessarily during heavy rain.

The Himalayan
Previous postVertical Limit: Climbing the unclimbed peaks of Himalayas
Next postSky Cycling in Manali at 9,300ft to be reality soon