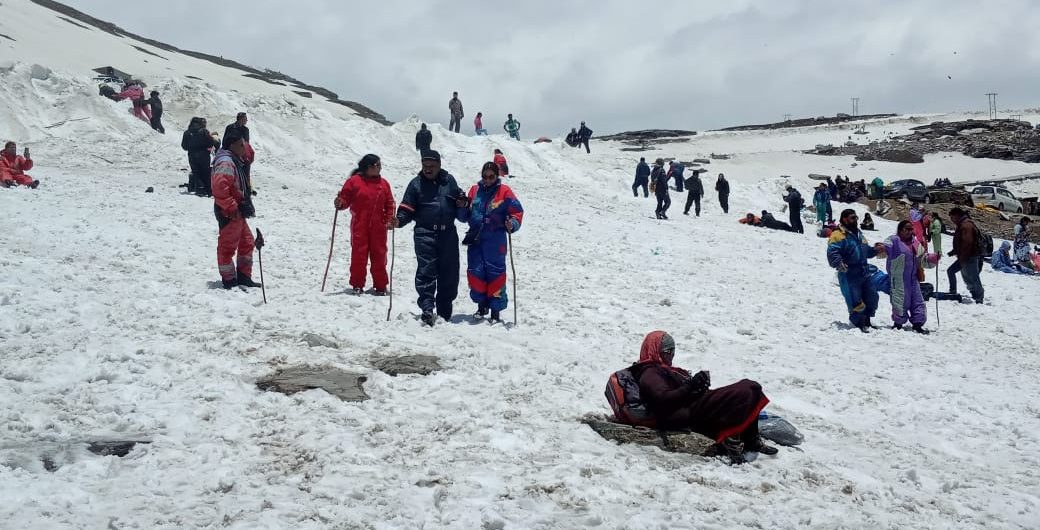 Adorned with piles of snows, the mystic Rohtang pass is now a subject of political debate not only in Himachal but in the entire country. Not only extreme climatic conditions, but Rohtang has witnessed the extent of injustice. Human handedness, pollution, noise, roars of military vehicles, trade of its precious amenity – snow and now political movements, this serene crown of Kullu and Lahaul-Spiti valley has suffered everything without any complaint.

In ancient time when no roads were dug on the chest of Rohtang, the Manali-Rohtang-Ladakh was a famous trade route for transportation of goods with the help of mules and sheep. Regretting the current condition of Rohtang, a historian Tashi Rawal said, “Earlier Manali was widely known as Dana-Bazaar as mules and sheep used to stay here for Dana (feed) before resuming their uphill journey to Rohtang. My grandfather used to tell us stories that one of the hard stretches between Manali and Rohtang was the 10km-long glacier which was originating from Rohtang. Where is that glacier now? Is this a result of human intervention?”

Having proved its strategic importance during Kargil war, the Rohtang pass is earning livelihood of thousands of families of the state. It is the only hill station of the country where tourists can find white snow round the year. No doubt, Rohtang is the pride of country. Then why this legendary mountain is crying for a heed from a special saviour? Government, people, administration and even media are selling its pious snow to earn fame and money. But nobody is trying to save this lifeless but beaming mountain from the vagaries of increasing population, pollution and politicians.
When Pandit Jawaharlal Nehru had a chance to have glance of Rohtang pass in 1960, even he could not resist and asked Manali folks, “What a beautiful mountain! Does any human being live behind this?” It is said that the idea to build Rohtang tunnel to connect Lahaul-Spiti with Kullu was founded by Nehru that day when he remained staring Rohtang for a long time at Nehru Kund near Manali. But it seems that government has failed to provide funds to improve the infrastructure of Rohtang pass, the golden goose of Himachal. Government and human beings are intent on squeezing the money out of it. Soon it will end with too much.
Some active environmentalists and scientists fear if we would be longing for snowfall at Rohtang. Senior scientist with GB Pant Institute of Himalayan Environment and Development, Dr JC Kuniyal said some the glaciers, flora and fauna around fragile Rohtang pass may be close the extinction due to pollution and human intervention.

Taking cognizance into the matter, HP high court has ordered the state government to find some proper ways to reduce down the pollution at Rohtang. The government has also been directed to make efforts to sort out the matter of traffic congestions on the Manali-Rohtang highway. Now the government was planning to stop movement of all light and medium vehicles on this route and start bus service which would adopt the passengers of many small vehicles at once. But the local taxi operators are set to oppose the government decision as they fear the decision would affect their livelihood.

Government is planning to set up a ropeway between Palchan (near Manali) and Rohtang for a long time. When frequent landslides and jams on poor Manali-Rohtang highway have proved that a successful and cozy highway can never be made after ripping the chest of Himalayas, the zero emission ropeway was a beautiful answer to the unsolved question mark of pollution crisis at Rohtang. But the plan doesn’t seem to be changed into reality so soon.
Political parties have been using this atheist white mountain as a good source of earning voters support for years. When Lahaul-Spiti gets cut-off from the rest country for around six months following a heavy snowfall at Rohtang, this mountain becomes a subject of political debate in the state. In fact, the weak technology and connectivity sources should be blamed for this but again this mountain bears the curse of both residents and politics.
Obligated with several kinds of pressure, at present when state government has imposed ban on plying of non-Himachal vehicles on Rohtang highway, once again the issue has become a matt

er of countrywide debate. The opposition party has left no stone unturned. If the numbers of patients exceed the capacity of hospital, government should arrange for more doctors and hospitals, not ask patients to find another hospital themselves. Following the same lines, government has banned outer vehicles in its endeavour towards fighting the battle of Rohtang issue.

Today, the 13,050 feet high Rohtang pass is more popular for political sparring than a tourist destination. If Rohtang were a human being, it would have been a successful politician or Prime Minister of the great country which it has been protecting for centuries.
Pictures: The Rohtang Pass (by Himachal Vacation Travel News)