Winter sets in; Lahaul valley prepares to get disconnected from the world

Winter sets in; Lahaul valley prepares to get disconnected from the world 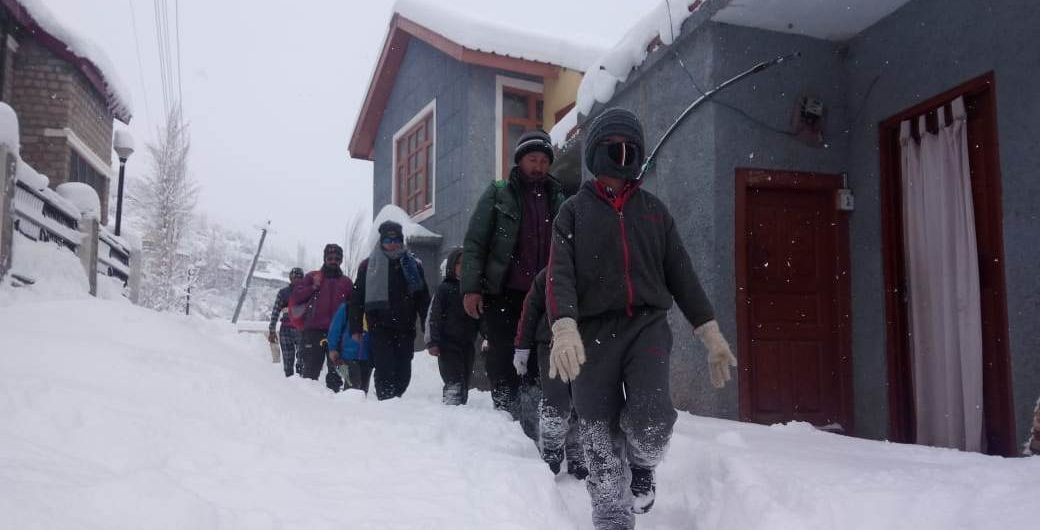 First snowfall of winter season in most parts of Lahaul valley has rang the bells of fierce
winter this year. Bringing down the mercury to sub zero temperatures, entire
Miyar valley of Lahaul including Rohtang pass and Baralacha-la experienced
heavy snowfall upto 45cm since Thursday early morning.
Rohtang pass received 15cm fresh snow but snow accumulation was 5 to 10cm in Miyar valley.
District headquarter Keylong witnessed shower of some snowflakes but
Baralacha-la received 45cm fresh snow. Lahaul-Spiti district administration
called on a meeting of all departments to review the preparations before
getting disconnected from rest of the country for next six months. Essential
commodities like LPG, kerosene, medicines, fuel wood, diesel and ration are
being stocked as heavy snowfall may block all roads leading to the district any
time.
Lahaul-Spiti
deputy commissioner Beer Singh Thakur said most of the commodities have been
stocked while efforts are being made to stock remaining things as soon as
possible. “Majority of portion of ration, fuel, firewood, seeds, LPG and
medicines has arrived in valley. Remaining commodities like fertilizers are on
their way. I had a meeting with officials of all departments on Thursday and
reviewed preparations for winter months,” he said.
District
administration has come into action after sudden snowfall. A detailed plan was
made on how relief would be provided to the residents in case of heavy
snowfall. Thakur said that some people were putting their lives in danger by
driving across the Baralacha pass and they have decided to stop vehicular
traffic on Keylong-Leh road after next spell of snowfall.
Thakur adds, “We
have a little time to make all arrangements before getting disconnected with
other parts of the state. Heavy snowfall may cut all road links for many months
any time now onwards. Our priority is safety of the residents, their medical
care, disaster management, ration and fuel. Orders have been passed to all
departments to make all arrangements within few days.”
Neeraj Thakur
from Shukto village of Miyar said, “It was snowing heavily in the early
morning. We have not made all arrangements for the winter yet. It’s freezing
cold here and white mantle has covered almost entire Lahaul.” Residents are
done with all agricultural works. They will spend most of their time before
tandoor by playing cards, weaving socks or by doing anything to spend time. The
worse condition comes to them when someone falls ill and bad weather does not
allow helicopter to enter the valley.
Fearing closure
of roads, many residents have started migrating to Kullu and other parts of the
state. Those who are outside Lahaul valley for necessary shopping are returning
back home. Once snowfall will block are modes of surface transport, emergency
helicopter service will be the only mode of transport for thousands of
residents.

It is a big relief for 28 panchayats of Lahaul that Manali-Rohtang highway is not
closed officially on October 31. Last year the highway was announced to be
closed on the same day.
Border Roads Organization (BRO) has decided to keep the Manali-Rohtang-Keylong highway open
as long as it is possible. BRO has launched various maintenance works including
widening of the highway in Lahaul. Jawans will keep working even during the
winter months. Organization has decided to clear the road after moderate
snowfall. Opening of the road will provide extended time period to the Rohtang
tunnel project in digging of the tunnel from Lahaul side.
38 Border Road
Task Force (BRTF) commander Colonel Yogesh Nair said, “Depending on the weather
conditions, we shall try to keep the road open as long as possible. We are
carrying out road widening work and will try to work until heavy snowfall
blocks the highway permanently for many months.”
District
administration is responsible for announcement of the official closure of the
road. Officially closing of the road means administration recommends not to
drive on the road. People, however, can drive on road but will be responsible
for any mishap due to inclement weather conditions or other reason. Generally
BRO doesn’t clear snow form the highway after official closure of the road but
its officials, who find difficulty working on the road due to high tourist flow
in summers, will take advantage in the light snowfall and work until heavy snowfall makes working impossible.