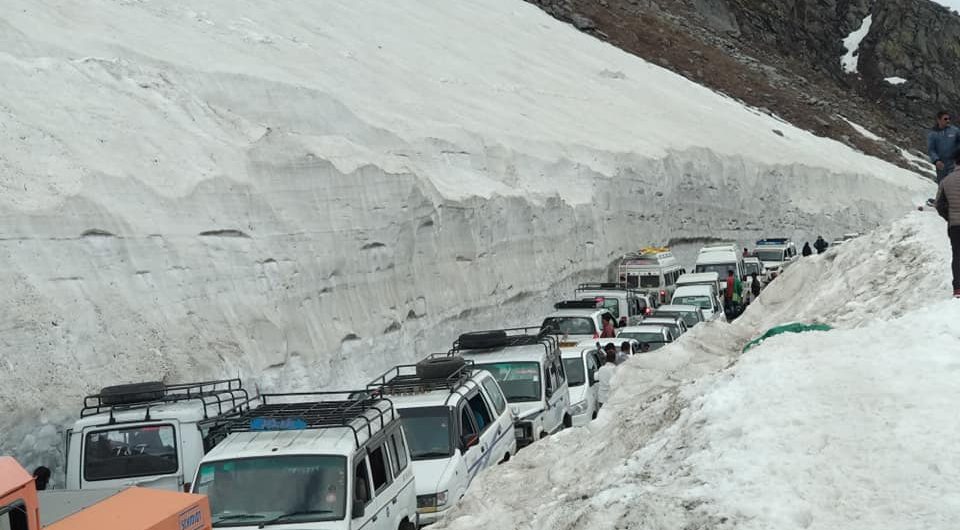 As the general elections have ended, tourists who gave a miss to hill stations in May have started to make a beeline to Manali to get respite from the scorching heat of the plains.

The elections have badly hit the summer tourism of Himachal as hoteliers claim they have never seen such a poor business in May month. With elections ended and hills of Manali still experiencing fresh snowfall, hoteliers believe they see a good tourist crowd till the end of June. The tourist footfall is increasing gradually but most of the tourists are ending up stuck in traffic jams for hours.

The charm of snow along Manali-Rohtang road is attracting tourists to Manali. A number of tourist vehicles entering Manali is increasing every day. But the long traffic jams at multiple places between Bhuntar and Marhi are ruining their holiday mood. While a one-way bridge at Dobhi has become the worst bottleneck, NHAI has failed to stop sliding of a small stretch at 16 Mile where sometimes vehicles are forced to wait for 1 to 2 hours for their turn. The traffic is moving at snail’s pace on Bhuntar-Ramshila stretch of the highway where road construction is continuing. It has become a routine to face traffic jams from Manali to Marhi, the snow point of Manali.

The hoteliers say May and June are the months when lakhs of tourists throng Manali and most hotels remain occupied. They rue that not just elections but it is poor infrastructure that is irking the tourists and putting a negative impact on the tourism industry.

Manali Hoteliers’ Association president Anup Ram Thakur said the condition of the road from Kiratpur (Punjab) to Manali is not good which is affecting the tourism. “Unscientific construction of four-lane highway without conducting proper study of the area is resulting in landslides and traffic jams. Despite the repeated request, NHAI is not bothered about tourism. A huge patch of mountain face is sliding on the highway near Manali town for last 6 months, causing inconvenience to tourists and local residents. Even students do not reach school on time. It is difficult to walk here on foot. Even government is not taking it seriously. Similar is condition at 16 Mile. At both the places, landslides are caused by cutting of the land haphazardly without making channels for water seeping from the mountain faces,” he said.

The hoteliers urged the government to take issue of landslides and traffic jams seriously as they fear it can badly affect tourism in June month as well. Not only hoteliers but taxi drivers and shopkeepers in Manali are disappointed with low tourist footfall in May. Everyone is now expecting good business in June month. These days tourists are being allowed to go till Marhi where they can get to see enough snow.

The Himalayan
Previous postWinter-like conditions in Himachal after rain, snowfall
Next postAnother check-post established at Kothi to comply NGT order in Manali