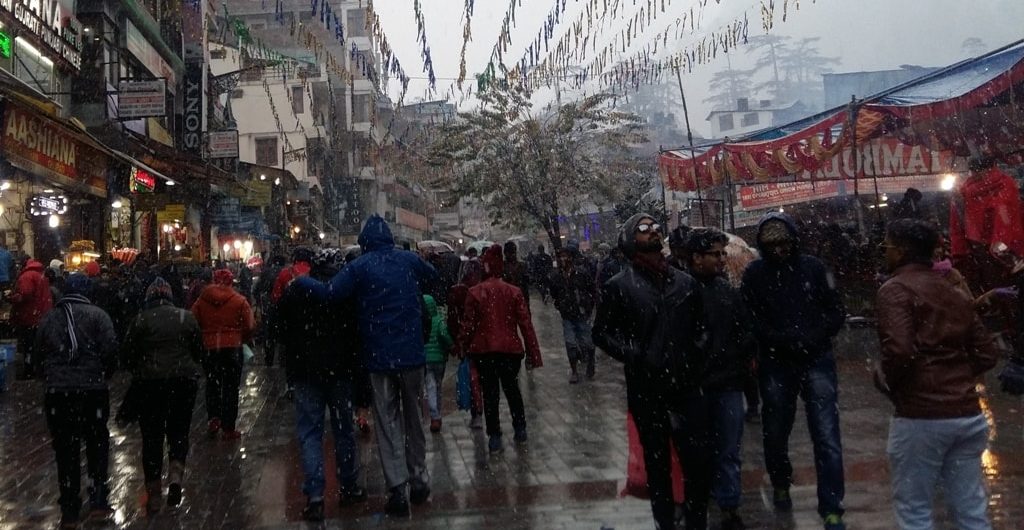 MANALI: Snowfall for the whole day on Thursday thrilled tourists in this town which recorded minimum temperature of minus 5 degrees C, lowest of the season.

The residents of Manali woke up to a white sheet of snow on Thursday. This was the coldest morning of the season. After witnessing some sunshine, snowfall restarted in the afternoon and thrilled thousands of tourists here. Tourist places of the town have come alive again with heavy tourist crowd. The visitors, mostly from Delhi, Punjab, Haryana, Chandigarh, UP, Gujarat and Maharashtra, enjoyed snowfall on the Mall Road of the town, Solang valley and nearby places.

Solang and Kothi have received 10cm of fresh snow. Rohtang pass, which is inaccessible in winters, has received nearly 15cm of snow. At minus 9.3 degrees C Keylong was the coldest in Himachal.

After Christmas, tourists are thronging Manali for new year celebrations. The snowfall has doubled the joy of celebrations. Hoteliers, who were facing slump in business since July, are happy after fresh snowfall. Now they expect more snowfall during new year eve to make occasion more special and memorable.

There are chances of White New Year as local meteorological centre has predicted rain and snow on mid and high hills of the state on December 30, January 1 and 2.

Meanwhile, long traffic jams are annoying both tourists and local residents. The national highway has temporarily been shifted to outside the town and traffic has been made one way. The tourist buses are not being allowed to enter the town and are being stopped 5km before Manali to avoid jams. Despite this the problem could not be solved. The town is expected to jam completely after December 30 when thousands of tourists are expected to reach here for celebrations.

The rescue posts established on either side of Rohtang pass to monitor safe movement of vehicles and pedestrians have been closed on Thursday, an official said.

The pass has now been closed for the season for pedestrians. Heavy snowfall in last few days had already blocked the pass for vehicular traffic. As it is not possible for pedestrians to cross Rohtang pass, the rescue posts have been closed and the staff has returned back to their offices.

Keylong SDM Amar Negi said given the snowfall and extreme cold on the pass, the rescue posts of Koksar and Marhi have been closed. “People are advised not to put lives in danger by attempting to cross the pass. People in need can apply for seat in helicopter to desired helipad at DC office Keylong or booking office in Kullu. The rescue posts would be reestablished after end of winter season when the pass would become safe for pedestrians,” he said.