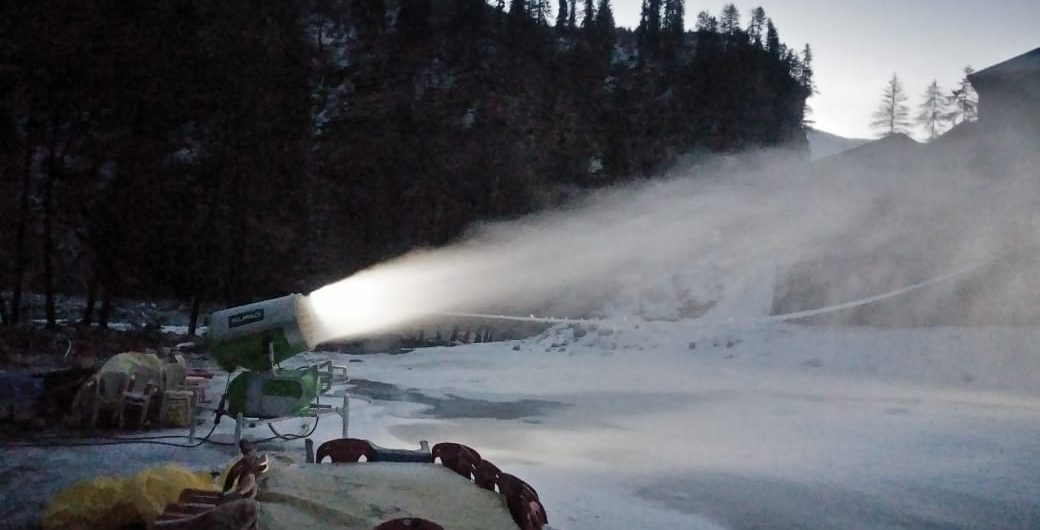 MANALI: Tourists can now not just see snow but even snowfall everyday for five months in winters as the snow-making machine (snow gun) imported from Europe by four youths of Manali has started making snow. The trial has been successful and the machine made 30cm of snow early morning on Friday.

It took nearly two weeks in installation of the machine on private land in Solang valley. The machine was started in the night time and nearly 30cm of powder snow accumulated on the ground in few hours. The snow park was opened for all tourists for free where they did skiing and other activities. Youths, who expect self employment from this, are planning to charge some entry fee from visitors in coming days. The machine has cost them nearly Rs 40 lakh before it started making snow.

Expressing his happiness, one of the youths Sunil Thakur, told Discover Kullu Manali: “The experiment has been successful. The machine is very expensive. We were earlier worried if machine will work properly or not. This is new thing for tourists and all. The machine is making perfect snow. Not depending on weather for natural snowfall, tourists can now see snow here from November till March when temperature dips below freezing point. The best thing is the whole technology is 100 per cent eco friendly.”

Hira Lal, Gokul Thakur and Mohan, other three partners were explaining to others that how powerful fans of the machine breaks water into superfine droplets which start floating in air and cool climate turns them into ice which eventually falls on ground in form of natural snow. The technology is not new in Europe and many developed nations where snow guns are used to make snow in ski resorts, but technology has never been tried in Himachal before this. The local skiers have been demanding from government to installs snow guns on slopes from many years but youths from small villages did this before government. However, their machine cannot be used on government land.

Roshan Thakur, former secretary general of Winter Games Federation of India helped youths in importing machine. “The snow quality is great. It’s great that the technology has eventually reached Himachal. I am in talk with our sports minister so that more such machines are installed on our skiing slopes. This way our skiers can do rehearsal everyday in winters. And we can host winter sports competitions anytime without depending on weather,” he said.