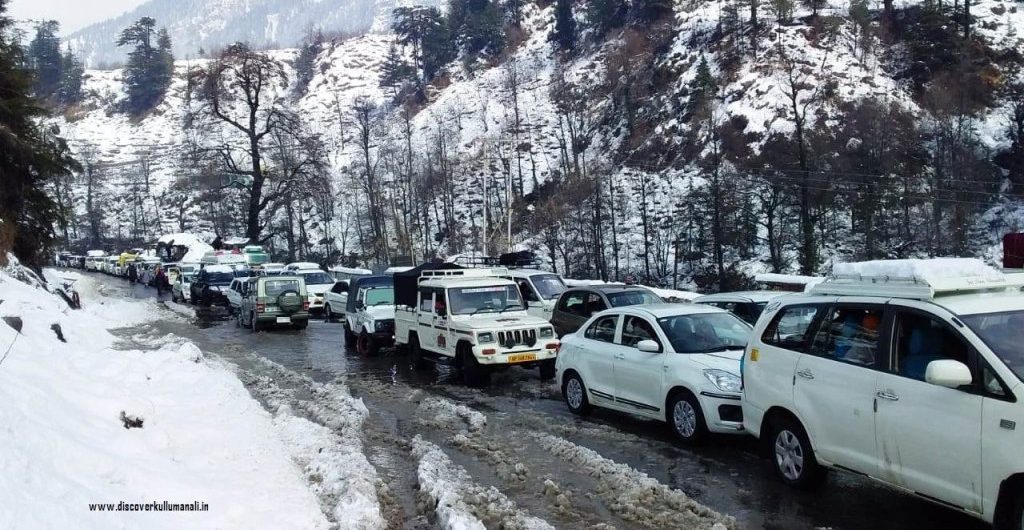 With all parking places, roads, streets and footpaths occupied with vehicles, tourists struggling in search of rooms and DJs presenting their live performances, Manali had a wonderful but hectic New Year’s Eve and the celebrations are still continued.
Over 30,000 tourists from across the country had thronged Manali for New Year celebrations on December 31. Most of the hotels were occupied fully and all the tourist places of Manali were jammed with multitude of tourists. The condition was worse on Manali-Rohtang highway where traffic was moving with speed not more than 5 kmph. Around 5,000 tourist vehicles reached Marhi and Beas Nullah, the snow points of Manali, and frozen the traffic. On Sunday, around 3,500 vehicles thronged Beas Nullah.
Police had a tough time restoring traffic between 35-km-long stretch of Manali-Marhi highway. Given the seriousness of matter, police officers had to rush to the spot. Influenced by the happiness of celebrations, tourists had parked their vehicles on the middle of the road and enjoying playing with snow.
“We had to use our entire power for smooth running of traffic as thousands of vehicles have reached here suddenly,” Manali deputy superintendent of police Shamsher Singh said. He added that police personnel have been deployed at a certain distance on highway and town to avoid untoward incidents.
Taxi operators in Manali are having good business after a long time. However, vehicles registered outside Himachal too are allowed to go to the snow point, even then Manali is facing shortage of taxis for local sightseeing. Disappointment of not reaching Rohtang top is breaking the hearts of tourists but they are enjoying even small patches of snow scattered along the highway.
Faces of those providing snow dresses on rent, ski and paragliding instructors are shining with happiness. “Business has picked up the pace and similar rush of tourists is expected to remain till January 5,” said Sandeep Kumar, who is renting out 40 to 60 snow dresses every day.
DJ parties and contests welcome in New Year in Manali
MANALI: Serene atmosphere of Manali was echoed with the sound of DJ parties, live music shows, bonfires and gala dinners on the New Year’s eve. All the hotels had arranged for parties for their customers in their own style but the grand party at Himachal Tourism’s club house in Manali was the centre of attraction for tourists.
New Year queen contest, lemon dance, balloon dance and DJ dance were organized here followed by welcome with Kulluvi caps, gala dinner, bonfire and Himachali folk dance. Over 50 tourist couples participated in the contests and Tripti Sharma from Dehradoon won the New Year queen title. Sunita and Ajay from Chandigarh won the lemon dance competition and Ghaziabad residents Simran and Jitender were balloon dance winners. Mr and Mrs Amit Sharma from Kangra were the best dance couples of the evening.
Himachal Pradesh tourism development corporation (HPTDC) assistant general manager Mohan Lal Sharma said they had a spectacular party and club house was packed to its capacity. “Tourists appreciated Kulluvi folk dance and enjoyed the contests. Special competitions were organized for children,” he said.