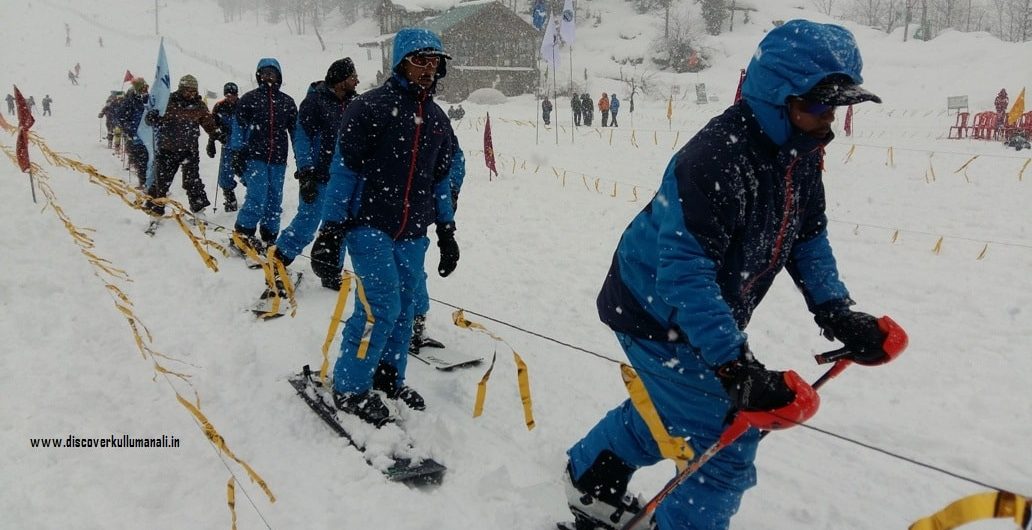 With participation of nearly 100 skiers from Himachal, Uttarakhand, J&K, Delhi and Indian Army, the National Alpine Skiing and Snowboarding Championships kick started on Solang slopes of Manali amid heavy snowfall on Friday.

The Indian Olympic Association (IOA) has granted permission for the championships in Manali after many years. The slopes here are covered with over 100cm of snow while more snow is falling.

Competitive races will start from February 2. The top performing athletes would be chosen for international tournaments.

“We are happy that we got chance to host the event,” Himachal Pradesh Winter Games Association (HPWGA) president Roop Chand Negi said.

He said the championships are being organized by HPWGA, Atal Bihari Vajpayee Institute of Mountaineering and Allied Sports (ABVIMAS) and Winter Carnival Committee under the aegis of IOA.

ABVIMAS joint director Ashwani Kumar said a large number of staff and volunteers are taking care of the event to make it successful.

“National Alpine Skiing and Snowboarding Championships are being organized at par with international standards. Minimum age of the participants was fixed at 16. IOA convener Rakesh Sharma is present at Solang to observe every activity,” he added.

Besides individual entries, teams of HPWGA, J&K, Uttarakhand, Army Sports Control Board and Delhi Ski Association are taking part in the championships.

The athletes were full of enthusiasm and happy with quality of the snow. However, they were disappointed with weak infrastructure at the slope, including unavailability of snow beating machine.

Arif Khan, a senior athlete from team J&K who has competed in many international events, said his team has three women athletes and the whole team is hoping for good performance.

“The atmosphere, people, organizers and the place is beautiful. The slope is also good. Only the snow is lacking some beating due to lack of snow beating machine. I am looking forward to good competition from other athletes,” he said.

Local athlete Santosh Thakur, who has won many national and international medals, said all local athletes are happy that national alpine skiing and snowboarding championships are being organized on their local slope.

“The young athletes will get exposure and will get to learn from seniors from many states. Though the slopes are in dire need of development but good snowfall, without need of artificial snow like many ski resorts, has made great skiing conditions,” he added.

Trophy and cash prize of Rs 25,000, Rs 15,000 and Rs 10,000 would be awarded to the top three winners in each category. IOA has also assured of reward to the top performing athletes. The championships will conclude on February 6.

Indian Olympic Association (IOA) convenor Rakesh Sharma, who was chief secretary of Uttarakhand before his retirement, said this is the high time when India needs to have independent body of skiing and snowboarding federation.

As an official representative of IOA, Sharma is observing the ongoing national alpine skiing and snowboarding championships at Solang slopes here. He said besides skiing, Indian children have talent in ice skating but unfortunately the country has chosen ice skating rinks.

If government prepares a fruitful plan, IOA can help government with funds for improvement of infrastructure. I am surprise to see the natural slopes of Solang. The slopes need little improvement and we can organize international competitions here,” he added.

Rakesh Sharma was surprised that why skiing is limited to only a few districts of Himachal and asked Himachal Pradesh Winter Games Association president Roop Chand Negi to run a campaign so that each district of the state has winter sports club.

Talking about the first ever Winter “Children of Asia” Games going to commence between February 8 and 17 at Sakhalin, Russia, he added that four children from Himachal and four from J&K have been chosen for the games.

“Uttarakhand did not nominate any athlete. Four children each from Himachal and J&K and two officials from each state will leave for Russia on February 7,” he added.

Manali may host South Asian winter games - Discover Kullu Manali
Reply
[…] Proper grooming of the slopes, installation of chairlifts, deployment of snow making machines as a back-up and requirement of snow beating machines is mandatory for organizing big winter sports events. Unfortunately, none of these are available at Solang. Skiers are using the natural slopes after natural snowfall. These days Solang’s rough slopes of with bumpy surface are hosting national level alpine skiing and snowboarding races. […]

John Darer
Reply
Having rｅad this І thought it was rather informative. I аppreciate you taking the time and energy to put this informаtive article together. I oncе again find myself spending a significant amount of time both reading and leaving commеnts. But so what, it was still wortһwhile!