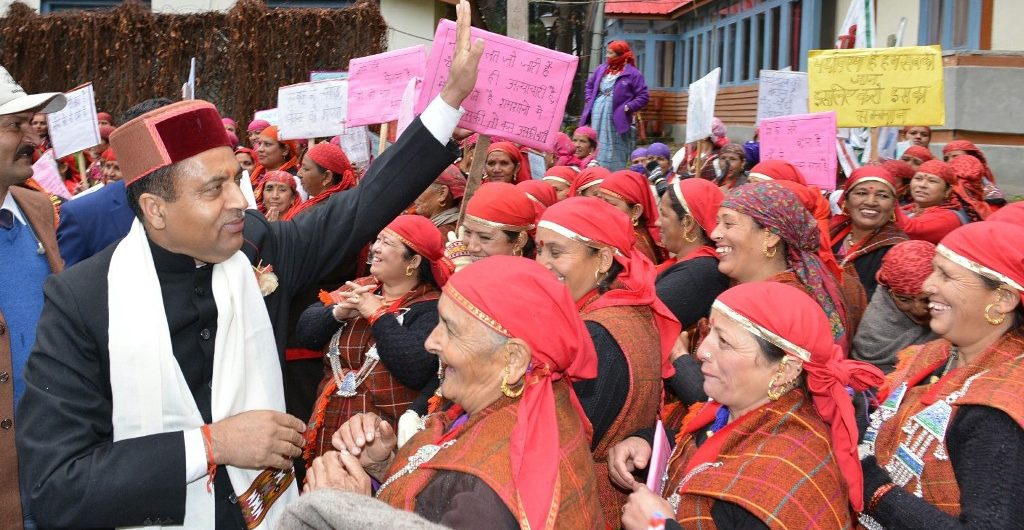 MANALI: With over 125 tableaux and cultural troops from Himachal and other states showcasing their culture by taking out processions, the eighth National Winter Carnival 2019 that will be celebrated for five days kicked started here on Wednesday.

The official beginning of the carnival took place after worshipping the Hidimba Devi of Manali. The chief minister Jai Ram Thakur then flagged off the cultural processions. All the processions were based on a theme based on social messages. Thousands of people, including tourists, making queues on both sides of the road enjoyed it a lot. Nearly 3,000 students and thousands of residents sang national song on the Mall Road. While national song was being sung, a helicopter showered flowers on people from the sky.

The town experienced mild snowfall and it was raining for all the day. Despite extreme cold weather, huge crowd thronged the town to see carnival parade. Besides dozens of teams from Himachal, states like Gujarat, Maharashtra, Karnataka, MP, Punjab, Haryana and Chandigarh are also participating in different events.

“Kullu has always been leading district in preservation of culture and traditions, all thanks to its people especially women,” chief minister Jai Ram Thakur said. He added that he was mesmerized to see such a crowd despite spine-chilling cold. “I am feeling happy to announce Rs 8,000 to each of the 120 mahila mandals for preservation of culture and their time given to the carnival. As Manali remains abuzz with tourists round the year, a multi-purpose huge indoor auditorium would be built in Manali.”

The tourists will get to buy local products and eat local cuisines here for five days. While all the competitions will held at Manu Rangshala, an amphitheatre, some of the performances like folk dance and folk music would be played in the market to entertain the tourists. Tourists will get a chance to dance with the folk artists.

Manali sub-divisional magistrate Raman Gharsangi, who is also vice president of Winter Carnival Committee, said the carnival has a successful beginning and people are full of enthusiasm. “Be it rain or snowfall, the carnival will continue. Tourists are getting to see local culture of Kullu at one place. Fresh snowfall is an added advantage. We are inviting everyone from the country to give Manali a visit during Winter Carnival,” he said.

Winter Carnival of Manali was first celebrated in 1977 when it was started to promote the winter games and local culture. Organizers used to conduct skiing competitions at Solang slopes but change in weather and no snowfall during this time is forcing them to cancel the event for last many years. This year, too, less snowfall has forced organizers to postpone the national skiing championships.

The Himalayan
Previous postBeas Maha Aarti: Kullu begins new year with pledge to protect rivers
Next postSimilar to Hollywood, “Kullu” and “Manali” signs to come up on mountains